From Robert Redford’s affinity for aviators to the Persol frames that now bear Steven McQueen’s name, these are the most famous sunglasses in history

Some celebrities wear sunglasses for anonymity. Hiding from the paparazzi or sneaking past superfans, they slip on a pair of shades and immediately become invisible. It’s a disguise — albeit a very fashionable one. But there’s a certain breed of celebrity for which this doesn’t work, one so famous that no frames can contain them. And this sort of celebrity is recognised because of their sunglasses.

We’ve rounded up the icons who famously incorporated a pair or style of sunglasses into their everyday lives and looks. They became so synonymous with their shades that some companies even renamed their frames to honour these famous wearers. So, do you know who was famous for wearing a pair of Persol 714s? Or who would wear exclusively Aviator sunglasses? Find out below. 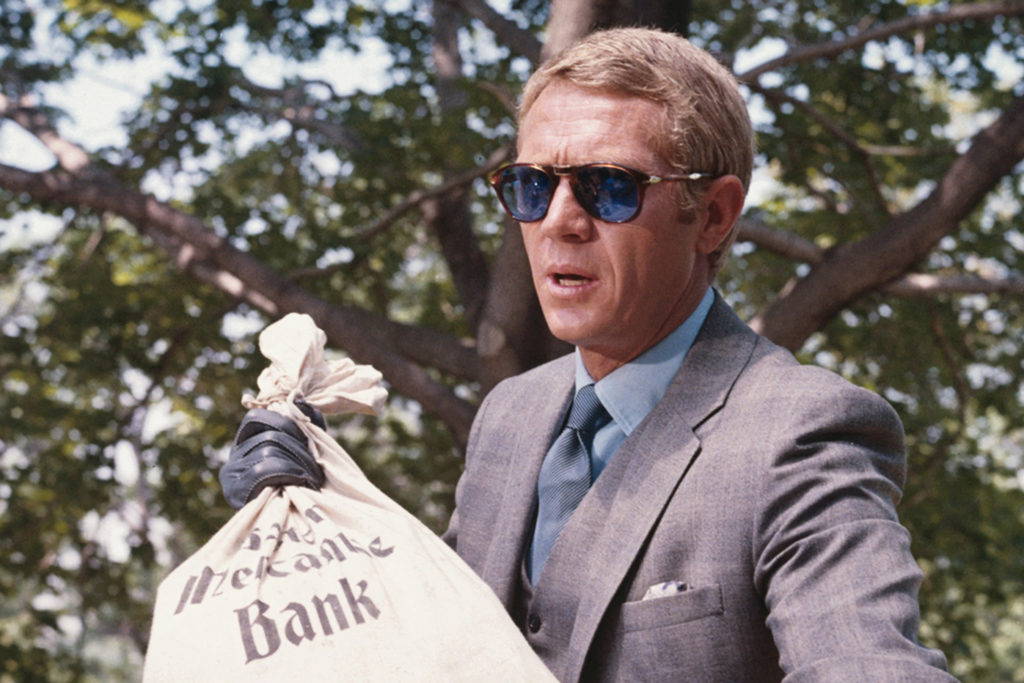 A big swing with which to start, first up is Steve McQueen and his legendary Persol frames. It was 1968, and the non-conventional, uber-cool actor had strode onto the set of The Thomas Crown Affair. He was wearing a pair of caramel brown acetate 714 frames from Persol with light blue lenses — and it was to be an image that would endure to this day.

Persol had only been around in the United States for six years at the time (it was founded in Italy in 1917 and originally produced sunglasses for pilots and racing car drivers), so McQueen’s early adoption saw sales rocket. Mac was so fond of them, in fact, that he also wore the same pair in Bullitt and The Getaway. Today, you can buy a pair of Persol 714 ‘SM’s from the brand — printed with the actor’s name and featuring the folding bridge design he favoured. 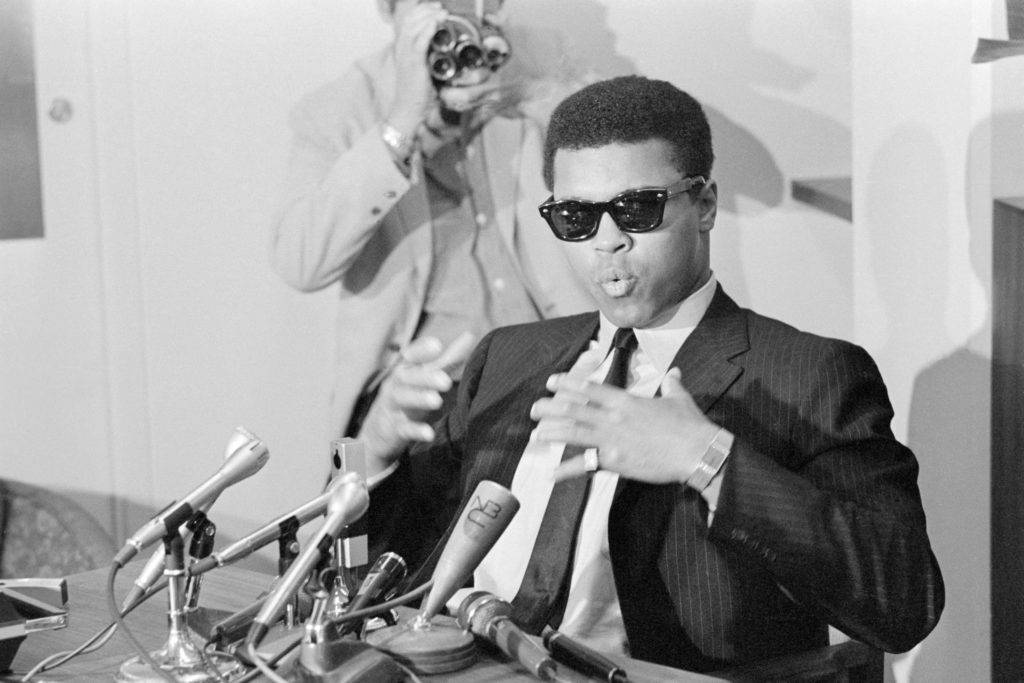 They may be the best-selling shades in the world, but it took The Greatest to bring them to the pinnacle of cool. In 1968, during a press conference at the University of Central Los Angeles, the heavyweight champion sat behind a pair of Ray-Ban Wayfarers and calmly called for America to address its still ‘brewing’ race problem.

Could pairing the style with a black suit and skinny tie have come across a little Blues Brothers? Of course it could. But Ali’s gravitas and unending reserves of charisma and cool make the look one of his most famous. Ali went on to favour other styles and brands of sunglasses, but this is the image that will always endure. 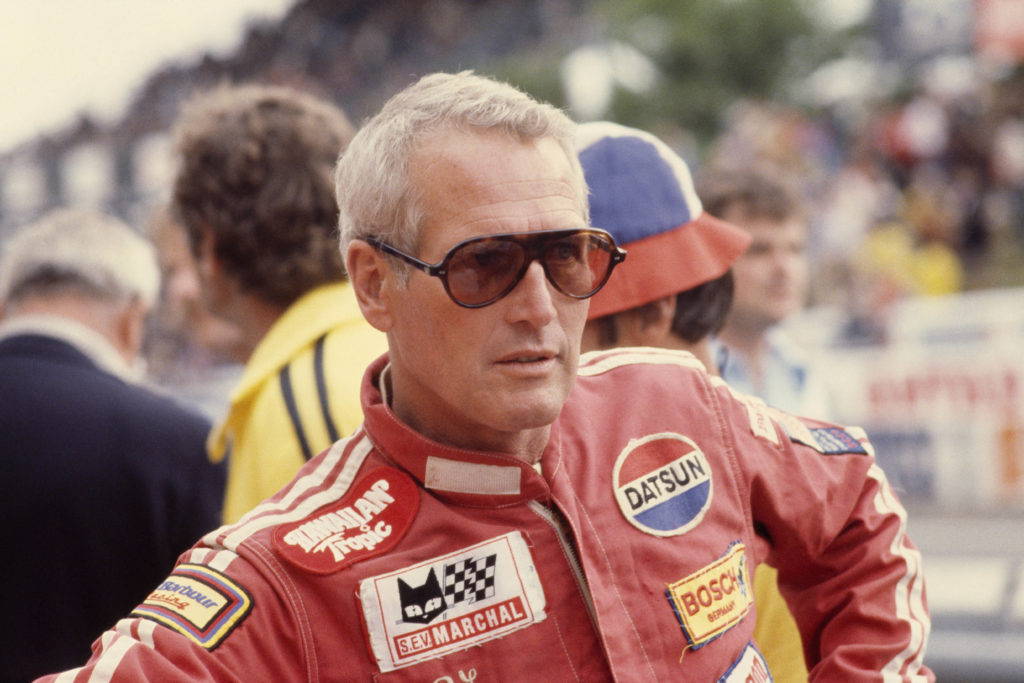 Paul Newman was married twice; three times if you count his sunglasses. There was almost nowhere that the film star went without his treasured Carrera Champion frames in tow. Above, he can be seen pictured at the 1979 24 Hours of Le Mans. But we could have just as easily shown you Newman wearing his singular shades at a political rally, on a family hike, or while relaxing on a film set.

As a peculiar kind of cross between a Wayfarer and an Aviator style, the Champions had a straight top, large lenses and curved arms — Newman used to let them hang by his chin, hooked around one ear and only just suspended. But then he always was a man who lived life on the edge… 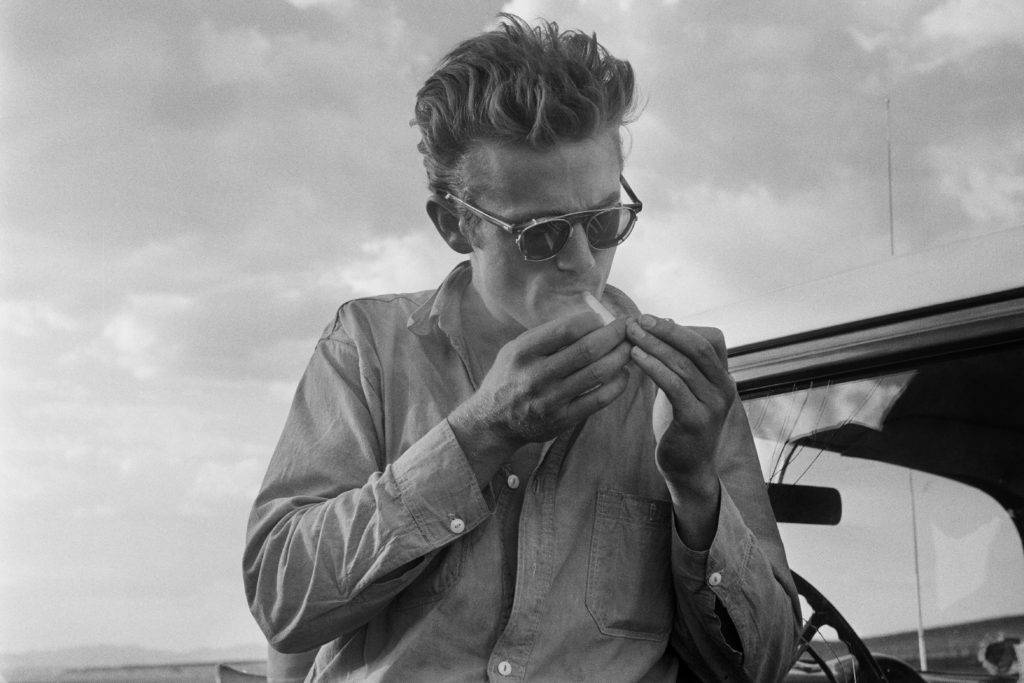 When Julius Tart founded his eponymous eyewear company in the mid-1940s, he wasn’t to know that one of the coolest, most stylistically-emulated men of all time would come to favour his frames. And yet he did. James Dean, riding the wave of fame, began wearing Tart spectacles — the Arnet frame to be precise. And, while he had a collection of these glasses for reading, it’s also widely accepted that his sunglasses were the same frames affixed with polarized clip-ons.

Seen above here on the set of Giant in 1955, Dean is shielding his eyes from the Texan sun with a pair of Tart Arnels. And, although the enduring image of America’s bad boy may be him using his glasses to read, we can’t help but prefer the shades look. After all, who doesn’t look better in sunglasses? 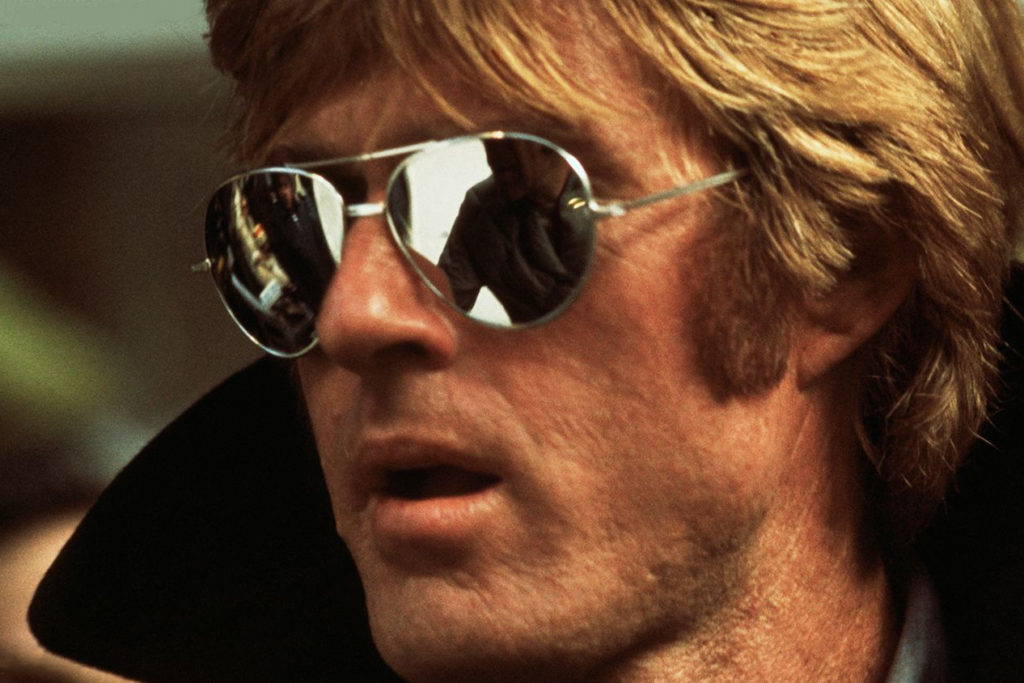 Now Robert Redford — he of The Great Gatsby, The Natural and The Sting — bucked the trend somewhat. Whereas most high-flying celebrities and actors of the time seemed to have one pair of sunglasses and stick to it, Redford plumped for a style instead. Namely, Aviator sunglasses — the coolest design in shades.

We know that, like fellow actors Tom Cruise and Jon Hamm, Redford had something of a soft spot for Randolph Engineering Aviators — with their squarer take on the classic style. But he also pulled on pairs of mirrored aviators, gold framed aviators and oversized lens aviators during his time on top in Hollywood. You can’t blame the man; he doesn’t half look good in them. 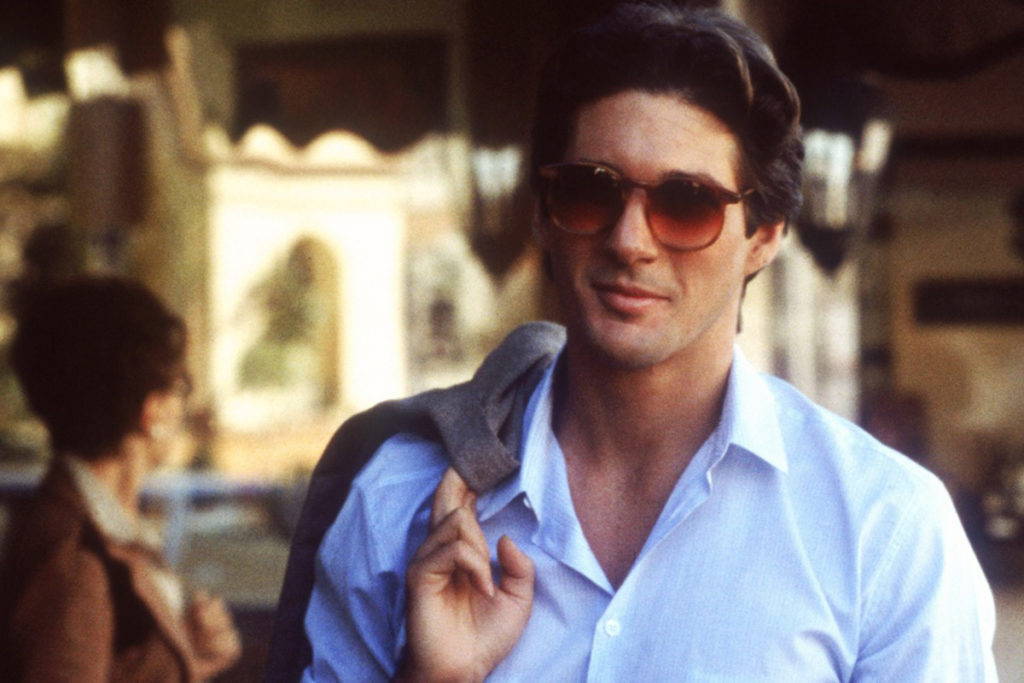 American Gigolo was a tour de force in the fashion world. The seminal 1980 thriller may not have won any awards at the time, and was to be eclipsed in Richard Gere’s oeuvre by Pretty Woman exactly a decade later, but our protagonist’s wardrobe brought truly modern high Italian style to the United States for the first time. Armani had arrived.

The label was propelled into fashion fame after Gere wore (and didn’t wear) its clothes in the film. And, even down to accessories, he stayed true to the label. So those large-framed, light tortoiseshell sunglasses you’ve always dreamed of owning? Yep, they’re Armani. In a slight Wayfarer style, we’ve not been able to track down an exact match, but these kicked off a golden decade for cinematic sunglasses. 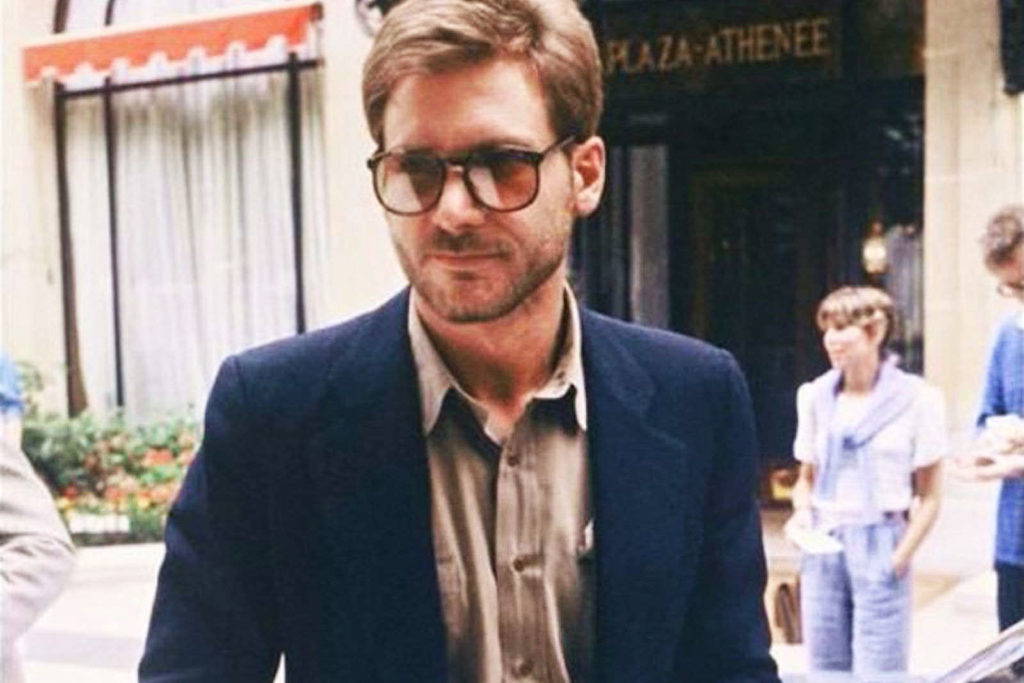 Another much-shared picture, Harrison Ford — like Steve McQueen — appeared to be a Persol man. Outside the Hôtel Plaza Athénée in Paris in 1980, Ford was at the peak of his Star Wars power and appears to have slipped on his shades in a bid to blend in. Unfortunately, look this good in a pair of sunglasses and that’s never going to happen.

The frames in questions, a pair of Terra Di Siena acetate sunglasses with brown lenses, are offered by Persol to this day. But, before you buy, be honest with yourself: Are you ever going to reach the levels of insouciant cool that a navy-blazered, young Harrison Ford had? 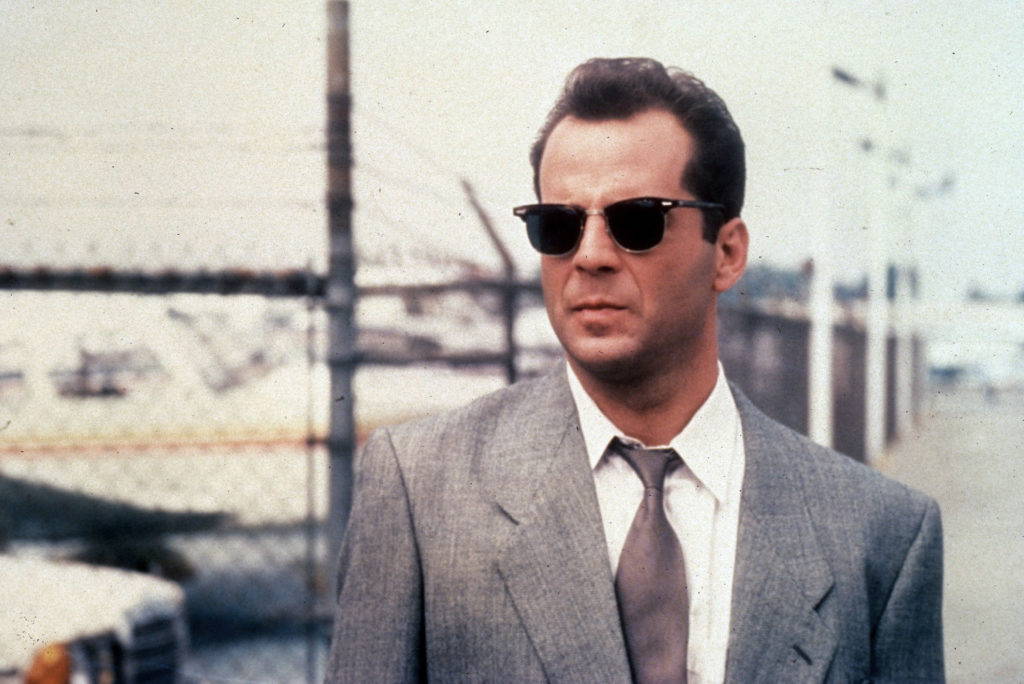 If you’re looking at young Bruce (hair! He has hair!) and thinking that these look a lot like Ray-Ban Clubmasters, then you’re not alone. In fact, Ray-Ban designed their famous Clubmaster style in response to the huge interest in browline glasses after Bruce Willis wore this very pair on the television series Moonlighting. But these weren’t Ray-Bans. These were Shuron Ronsirs.

Designed in 1947, Shuron’s original frame famously defined the look of the 1950s. But, after Bruce resparked interest in the style, they really took off. Today, copycats around the world churn out pretenders to Shuron’s crown. And it’s all thanks to that one image above. You’ve got to give it to him, though — he does look cool. 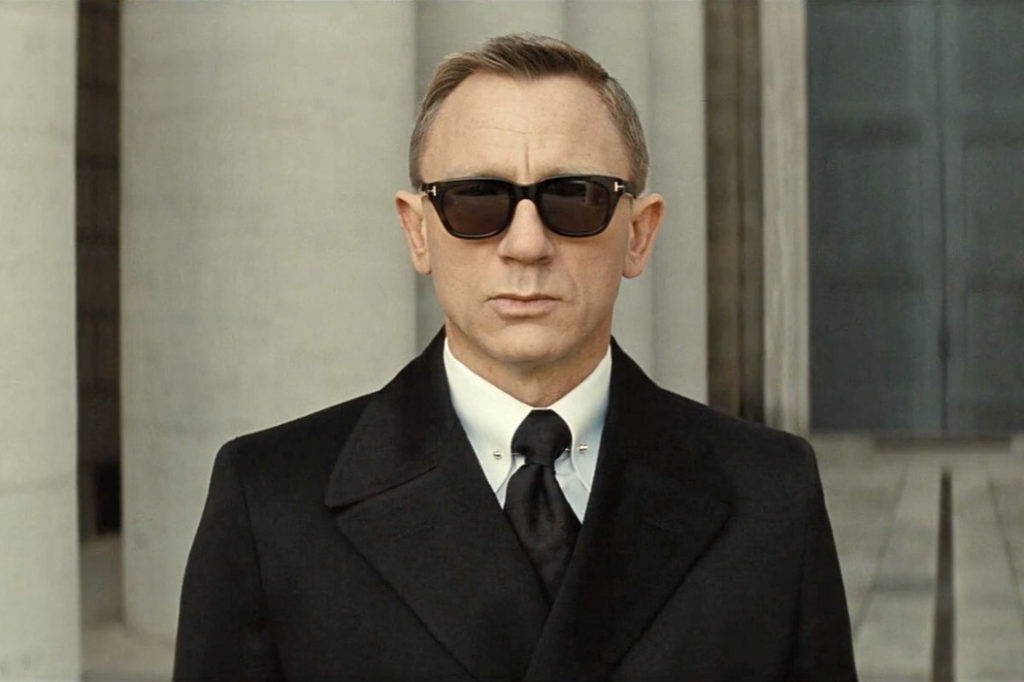 James Bond has had his fair share of frames, and one of the designs had to find its way on here. He’s James Bond, for God’s sake! But, rather than opting for Pierce Brosnan’s horrendous Calvin Klein frames or Connery’s preferred Curry & Paxtons, we’re opting for these optics; a pair of Tom Ford Snowdon frames from Spectre.

Ford, of course, tailors Daniel Craig’s Bond in the most recent films, so it makes sense that — as in American Gigolo above — the designer’s responsibilities would extend to the accessories. Worn in Rome, Bond’s pair are stoic, sensible Havana-coloured frames that, like the double-breasted overcoat he also wore in these scenes, have created an iconic look from the film. 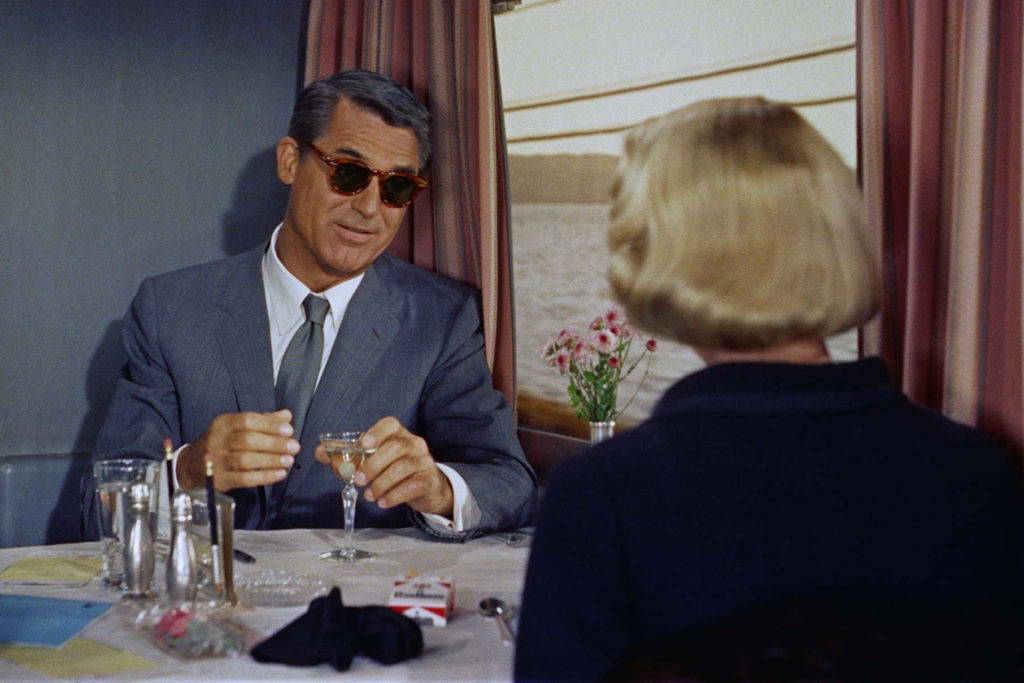 Ah, Mr Grant. We’ve been expecting you. While many people falsely believe Cary Grant’s cool frames in North by Northwest to be the same 714s as favoured by Steve McQueen, or even the same Tart Arnels James Dean wears further up this list, the likelihood is that they are actually the creation of Liberty Opticals.

Want more seasonal style inspiration? Here are the essentials every man should own this spring…